The meridian or Jing Luo (经络) is a path through which the life-energy known as Qi (气) is believed to flow. There are generally 72 channels of therapeutic importance. The most important and essential ones for the circulation of Chi, and for most therapeutic applications are the twelve Primary Meridians and eight Extraordinary Meridians.

The Eight Extraordinary Meridians represent the body’s deepest level of energetic structuring and are carriers of Yuan Qi (元气). Yuan Qi or original energy in direct translation from Chinese, is the ancestral energy (prenatal energy) which corresponds to genetic inheritance. They function as deep reservoirs from which the twelve main meridians can be replenished or drain their excesses. 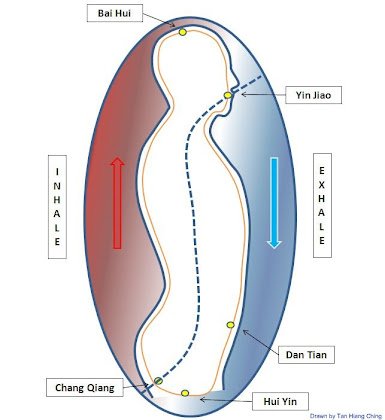 
The Du Mai flows from the tip of the coccyx (near to the anus) up the spine, over the head, and ends in the upper part of the mouth. The Ren Mai flows from the perineum up along the front mid-line of our torso, and ends in the lower mouth. Bringing the tip of the tongue to the roof of your mouth generates a connection. This is yin and yang in practice, connecting the masculine back channel and feminine front channel. The front and back channel are joined to form a circuit of continuous energy flow. This is how energy was circulated when we were in our mother’s womb. This circuit is called the Microcosmic Orbit.

The Microcosmic Orbit moves energy in a circular motion up the spine, over the head, down the front of the body, under the torso and down to the Dantian. Also referred to as the small heavenly cycle or Xiao Zhou Tian (小周天), this circuit allows us to increase, recycle, and store reservoirs of chi in the lower Dantian.